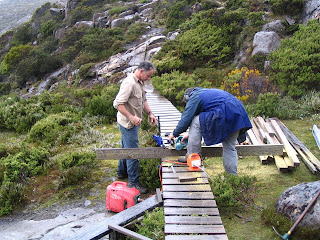 
After a spell of fairly dry weather it was clear that Tasmania could do with some rain, but it was a bit inconvenient to have it fall on the working bee day. However we went ahead with the arrangements made and joined Michael and Jeremy from the Mt Field staff for some repairs to the Rodway Shelter hut.

The cracked rear window pane (northern end panel) was replaced with Perspex, which was quite an operation given the state of the timber frame. It had also moved out of square over the years so a certain amount of improvisation was involved in the job. The outside sills of both the front and back windows were badly rotted and replaced.


The annual meeting of the group was held and resulted in Peter Franklin as President, Sue Franklin as Secretary and Greg Kidd as Projects Officer.


Photos from the day can be viewed by clicking here